Welcome to Victoria Pedretti Network at www.Victoria-Pedretti.net, your ultimate source for the talented actress Victoria Pedretti. You may know Victoria as Nell Crain in "The Haunting of Hill House" or as Love Quinn in "You". Make sure to check out our gallery with thousands of photos. Visit us again for all the latest on Victoria and her career.

You Season 3 Will Begin Filming This Autumn for Netflix

Filming for the third season of hit Netflix series, You, is reportedly due to commence in November.

After many months of waiting, we finally have an update on the production of the third season of the hit Netflix show about a charming stalker, You. According to reports, season 3 of You is expected to begin filming in Autumn, around early November this year, and will continue to film until late April 2021.

Netflix renewed the show back in January following the huge success of the second season, which saw as many 54 million viewers streaming You and joining lead star Penn Badgley on his creepy-yet-enthralling adventures.

Produced by Warner Horizon Television, in association with Alloy Entertainment and A&E Studios, the first season of You is based on the 2014 novel by Caroline Kepnes and introduces audiences to Joe Goldberg, a brilliant male bookstore manager who crosses paths with an aspiring female writer. A charming yet awkward crush becomes something even more sinister when the writer becomes the Joe’s obsession, as he uses social media and the internet to become close to her, even going so far as to remove any obstacle, including people, that stand in his way of getting to her.

The second season saw a change of scenery in both the show and its availability, moving from Lifetime to Netflix as a Netflix Original series. Loosely based on the novel Hidden Bodies by Caroline Kepnes, the second season of You finds Joe moving from New York to Los Angeles to escape his past. Changing his name to Will Bettelheim through nefarious means, he meets avid chef Love Quinn, and begins falling into his old patterns of obsession and violence. As Joe/Will attempts to forge a new love, he strives to make his relationship with Love succeed in a way that avoids the tragedy of his previous romantic exploits.

The third season finds Joe in something of a predicament, and in the final scene hints at him falling back into old habits and potentially losing his marbles once again, which, let’s face it, never ends well for anyone.

You season 3 will also bring back stars Penn Badgley and Victoria Pedretti to reprise their roles as Joe Goldberg and Love Quinn respectively. Co-creators Sera Gamble and Greg Berlanti also return to executive produce, with Gamble remaining on board as showrunner. Details surrounding the plot of season 3 remain tightly under wraps (no doubt locked inside a glass cage in a basement somewhere) but Gamble has teased what many had expected regarding a mysterious character glimpsed during the final moments of season 2.

“It’s pretty obvious when we were filming this that we were careful not to show too much of her because that role hasn’t technically been cast yet. But there’s lots to come with that neighbour,” Gamble said of the woman unlucky enough to live next door to Joe.

So, should this production schedule turn out to be true, we hopefully won’t have to wait too long before once again joining Joe as he continues to navigate the world of love and romance in his own uniquely violent way, with a vague release date of 2021 already set. See you soon, neighbor.

The Haunting of Bly Manor Video
admin
No comments

Latest updates of You season 3 on Netflix

You season is Netflix’s American thriller series, and it is an interesting love story. In this love story, a boy named Joe Goldberg, who is a charming psychopath. That boy finds his love from his backyard crack. It would be really an interesting story. Netflix has announced that You season 3 would hit the screen in 2021, but that is yet to be revealed. All Joe Goldberg fans are eagerly waiting for this season to enjoy this fantastic love story. Before discussing You season 3, let’s brief out some stories of the past two seasons:

Brief information about past seasons and casts

In season 1, Joe Goldberg falls in love with a girl in New York, and in the last part, things are not going smooth, and he went to Los Angles to avoid his ex-girlfriend Candace and here the story end for season 1. In season 2, he met with another girl in Los Angles, and she is such an interesting girl. Also saves him from going into a prison. At the end of season 2, we see a great couple who shared a great time in a suburban bliss until Joe Goldberg finds a head through his backyard crack.

Victoria Pedretti and Penn Badgley are coming back with their fantastic love story. In You season 3, some same faces are present from season 2, and Ellie is one of them.

In You season 3, Gerg Berlanti and Sera Gamble are come back as the executive producers and will present many exciting episodes. But the release date is yet to confirm officially. All production and shooting related works have already been started in this year and will hopefully release in the mid of 2021. Fans are waiting for this upcoming season to enjoy the storyline.

Hello, everyone! As you can see we have a new theme on the website. It was pretty quiet around Victoria for the past few months but “The Haunting of Bly Manor” is coming soon and I decided that it’s time for a fresh new look. I hope you like the new version of the site as much as I do!

Look around, enjoy your stay and visit us soon for the latest updates on Victoria and “The Haunting of Bly Manor”.

Hello, everyone! My name is Alissa and I want to welcome you all to Victoria Pedretti Network! I am so happy to finally open this fansite after being a fan of Victoria since 2018 when I watched “The Haunting of Hill House”. Our gallery has over 10,000 photos of Victoria so make sure to check it out! I have added photos of appearances, photoshoots, TV productions and screencaptures from interviews. I hope to add screencaptures from “The Haunting of Hill House” and “You” soon.

Make sure to follow us on Twitter to stay in touch with us. We are also looking for affiliates so if you are running a fansite and would like to be affiliated fill in this form.

I hope you like the site as much as I do. Look around and enjoy your stay at Victoria Pedretti Network! Thanks for visiting the site!

After an au pair’s tragic death, Henry hires a young American nanny to care for his orphaned niece and nephew who reside at Bly Manor with the chef Owen, groundskeeper Jamie and housekeeper, Mrs. Grose.

A dangerously charming, intensely obsessive young man goes to extreme measures to insert himself into the lives of those he is transfixed by. 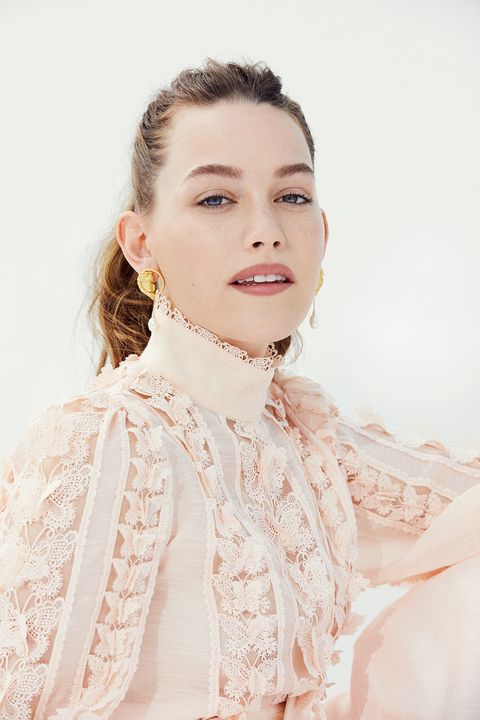 Are you a frequent visitor to Victoria Pedretti Network? Have any photos, captures, etc that you see missing in our gallery that you would like to donate to the site?
If so, feel free to send them our way. If you would rather donate multimedia or videos, that is welcome as well! Remember to include how you would like credited in the email along with the donation.

What can you donate?– Event/Appearance photos
– Magazine Scans
– Photo Sessions
– Screen Captures
– Video Clips
– Icons
– Wallpapers
– Animations
– and more!
Send donations to admin@victoria-pedretti.net
Please include how you would like to be credited (link, nickname, etc)

Victoria-Pedretti.net is in no way affiliated with Victoria Pedretti. We are not authorized by Victoria or her representatives. This site is an unofficial fan site and does not gain any profit. Please do not attempt to contact Victoria through us as we are not in direct contact. All images found on this website are owned by their original creators. The images and content on this fansite are used under the fair copyright law 107.